HOW TO MAKE A DOUGHNUTS AND THE TYPES

A doughnut or donut is a type of fried dough confectionery or dessert food. Donuts are one of the most popular foods of all time: sweet, delicious & can be eaten on the go. The origin is heavily debated. While no one really knows when it were invented or who invented them, they were originally made as a long twist of dough. Not in the ring form that is most common these days. It was also common in England for donuts to be made in a ball shape and injected with Jam after they were cooked. Hanson Gregory, an American, claimed to have invented the ring-shaped doughnut in 1847 aboard a lime-trading ship when he was 16 years old. Gregory was dissatisfied with the greasiness twisted into various shapes and with the raw center of regular ones.

The sugar in donuts help with concentration and memory. "It's quick, it's convenient, and it taste good," Pete Werner, Fit and Firm owner said. A doughnut might be good after you worked out, or something like that, where you need to replenish your energy sources," Werner said.

WHY DO DOUGHNUTS HAVE HOLES?

Gregory suggested punching a hole in the middle of the fried cakes, so that the insides of the cakes would cook as evenly as the outsides. ... Punching a hole in the middle of the dough, however, allows the insides and the outsides to cook evenly, creating a perfect donut. The earliest origins of modern doughnuts are generally traced back to the olykoek ("oil(y) cake") Dutch settlers brought with them to early New York (or New Amsterdam). These closely resembled later ones but did not yet have their current ring shape.

ABOUT FRENCH CRULLER, THE HEALTHY DOUGHNUTS

This donut consistently tops lists of the healthiest donut. Each French cruller only has 220 calories and 10 grams of sugar. As far as donuts go, the French cruller is practically a health food. The French Cruller PREPARATION is very easy 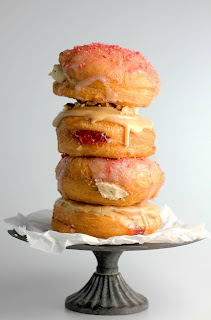 Doughnuts were brought to America by the Pilgrims and Dutch settlers. With time, they have become a distinctly American treat. In fact,  were distributed to American soldiers on the front lines of World War I by female Salvation Army workers known as "Doughnut Girls." But their history goes all the way back to ancient Rome and Greece. They also have a rich history in  as well.

Regardless of their origin, these versatile deep-fried dough balls have come to take on many different forms. Of course— this isn't an exhaustive list. There are literally endless types in the world. But we narrowed it down to some of the most popular types

After frying, ring are often topped. Raised doughnuts are generally covered with a glaze (icing). Cake doughnuts can also be glazed, powdered with confectioner's sugar, or covered with cinnamon and granulated sugar. They are also often topped with cake frosting (top only) and sometimes sprinkled with coconut, chopped peanuts, or sprinkles (also called jimmies).

HOW LONG CAN YOU STORE?

Properly stored, freshly baked donuts (not cream-filled) will last for about 1 to 2 days at normal room temperature; cream-filled donuts should be stored in the refrigerator. With such a huge amount of sugar in a small package, your body pumps out loads of insulin to try to accommodate. A huge blood sugar spike leads to an even bigger sugar crash. This extreme up-and-down leaves you hungry soon after your breakfast — and you'll crave even more refined carbs.

To make this French Cruller donut, bring the water, butter, sugar and salt to a brisk boil in a heavy-bottomed saucepan.
Stir in the flour all at once and continue stirring until the flour is completely incorporated.
Keep stirring over medium-high heat.
The more moisture you can remove, the more eggs you can mix in later which will result in a lighter pastry.
When you see a thin film start to coat the bottom of the pan, the batter is ready.
Transfer the dough to the bowl of a stand mixer.
Use the paddle attachment to stir the dough for a minute to help it cool.
Turn the mixer to medium speed and add one egg.
Don’t add the next egg until the previous has been completely incorporated into the dough.
Then add the egg whites a little bit at a time until the dough becomes smooth and glossy and holds a little shape (not much).
Do not add too much egg white or else the crullers will become heavy.
Transfer the dough to a large pastry bag fitted with a 1/2-inch star tip.
Fry the crullers in 2 inches (or more) of vegetable oil in a heavy-bottomed saucepan.
The oil should register 370 degrees.
While the oil is heating, cut a dozen 3-x3-inch squares of parchment.
Lightly grease the squares on one side (I brushed with vegetable oil) and pipe a ring of dough onto each of the squares.
When the oil has reached temperature, carefully place a French cruller, paper-side up, into the hot oil.
Do this one at a time unless you like the idea of hot oil burns and other disasters.
After a minute or so, use tongs and a sharp knife tip to gently peel the parchment off the cruller.
When the cruller turns golden (about 2 minutes), flip it over and let it fry for another couple of minutes before removing it to drain on a cooling rack or paper towels.
Make the glaze:
While the cruller donuts cool, mix the confectioners’ sugar, honey, and milk together until smooth.
When the crullers are cool to the touch, dip the top of each cruller into the honey glaze and set on a cooling rack to let the drips run off.
When the glaze has set, the crullers are ready to serve.
Crullers can also be baked.
Preheat oven to 450°F.
Pipe crullers onto a parchment-lined baking sheet at least 2 inches apart. Bake for five minutes then reduce oven to 350 degrees and bake another 15 minutes.
Turn off heat, open the oven door a crack, and let crullers sit for 5 to 10 minutes.
Glaze and serve.

4 tablespoons hot water or as needed